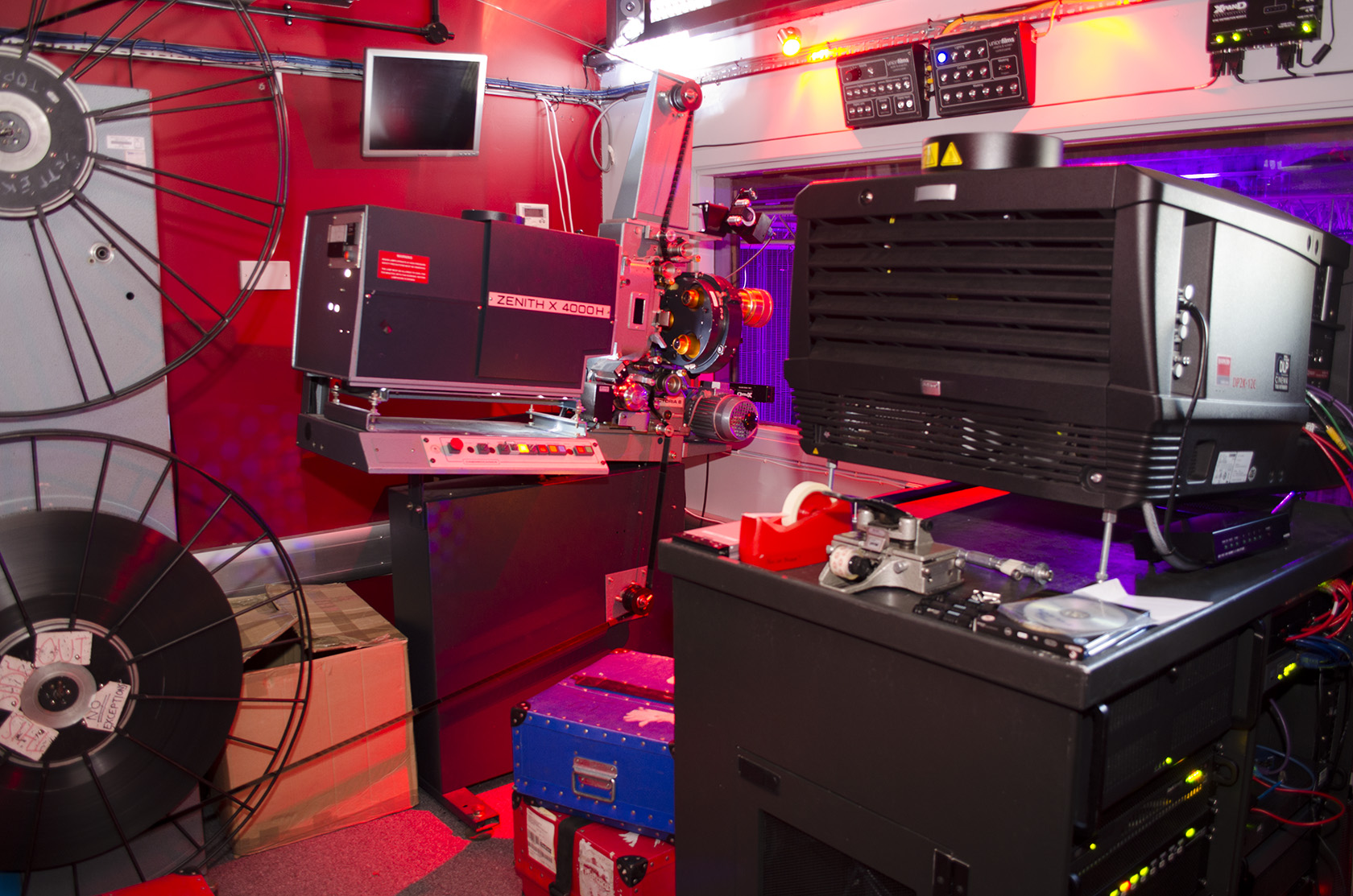 If you ever ask a projectionist why they like to project films, they will undoubtedly tell you that it.s the magic of it. Cinema really is magic. You feel a very special connection to a film when you are behind the projector, 35mm or Digital, controlling the machine and seeing as the film comes out onto the screen.

If you are interested in learning the art of projection, we offer a complete training scheme that we can tailor to fit around your free time. You'll learn everything from spooling and lacing a 35mm projector, to showing 3D films on our digital projector! Join the Facebook volunteers page or email us at projection@unionfilms.org if you are interested in becoming a projectionist, and we can give you more information to get you started!

We have a state of the art Barco digital cinema projector, capable of projecting films at a resolution of 2K (2048x1080). We are one of only a very small group of student cinemas to have a digital projector, and it allows us not only to project in amazing quality, but we can show 3D films as well!

We also have a Cinemeccanica Victoria 8 projector (which used to be in the Millenium Dome!) which shows 35mm film. There is nothing like hand winding and checking 4km-5km of celluloid, lacing it through all the sprockets and gears of the projector, firing her up and watching the images magically transformed into moving pictures. There is something utterly wondering about a proper mechanical machine.

Alongside our new digital projector, we also installed a new CP750 digital sound processor, upscaling our audio to a massive 7.1!

Union Films was the first student film society to have Dolby Digital installed. This was installed in July 1995 by James Ogden and Helen Payne who are now past Head Projectionists. SR-D stands for 'Spectral Recording - Digital'. This is the latest in the sound formats offered by Dolby laboratories. This sound format consists of 6 channels, Left, Right, Centre, Sub-bass and Left and Right Surrounds. The digital data is encoded as a bitmap and stored between the sprocket holes of the film. This area was chosen as it is the least vulnerable against wear and tear of 35mm film. The Cat 700 digital reader is a bolt on accessory to fit our 35mm projector, this allows the digital data to be read on a conventional analogue projector. The Cat 700 is connected to a unit which converts the bitmaps between the sprockets to analogue sound data which is then equalised and buffered by the cinema sound processor. The DA20 converts the digital feed from the reader into the 6 discrete channels, performing any error correction, or rebuilding the sound if the film is damaged. These 6 channels are fed into the back of the CP65, the main sound processor.

There are too many films released with a Dolby Digital track to mention, but a full list is available from the Dolby web site. The first was Batman Returns in 1992. Since installing SR-D in 1995 we have used it whenever possible, meaning our 35mm films will have the best sound quality technology can give.

DTS is another digital sound system from an American company called Digital Theatre Systems, which has revolutionised cinema sound. The principle of operation is simple. The sound is stored on CD-ROMS (instead of on the film itself) which are kept in synchronisation with the projected picture by a timecode printed down the edge of the film. The sound is crystal clear, offers a better tonal range and does not suffer from splices and 'drop outs' which are noticed with other formats.

Inside the DTS 6D unit is a 486 computer connected to 3 SCSI CD-ROM drives. Also inside are two dedicated logic cards used to regenerate the 6 channels of sound from the CDs. DTS was installed over Christmas 1997 by Mike Rendall and Martin Brooks, the HP and DHP at the time and has been very successful. DTS has numerous advantages, which include enabling a single inventory of a print to be made for different countries with the languages being provided by different DTS discs. This makes swapping between languages a simple matter of changing discs in the decoder.

*Dolby and the double-D symbol are registered trademarks of Dolby Laboratories.