The holiest event of our time. Perfect for their return. 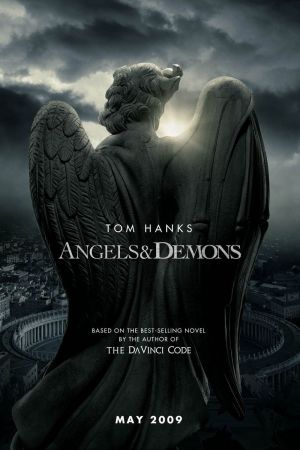 Dan Brown’s novels are packed with fascinating historical tidbits which he ingeniously twists into plots that are so intricate and complex that there is a constant need to inform the reader with exposition, often leaving little room for character development. There is a bit of this stilted quality to ANGELS AND DEMONS, the second of Brown’s novels to be brought to the big screen by the tandem of Ron Howard and Tom Hanks, but more than enough intense action to keep the eyes of the audience as busy as their minds.

The details of the plot are as diabolical as any in Hollywood history: after the pope’s death, a nefarious organization stashes an antimatter bomb somewhere in the Vatican, threatening to annihilate the conclave of cardinals who are meeting to elect the papal successor. To pass the time until the bomb will detonate, the enemy begins to torture and kill a few of the individual cardinals, but there is a pattern to the grotesque executions, involving hidden sculptural symbols and secret architectural clues. Unfortunately for the church, the man most capable of deciphering the code is the American "symbologist" Robert Langdon (Hanks), who happens to be an affirmed atheist.

The script is filled with amazing details about the centuries-old conflict between the church and the Illuminati (whose members included Galileo, Michelangelo, and Bernini), which Hanks uncovers as he breathlessly races between various landmarks in Rome, always a step behind the sinister assassin. The secondary cast consists almost entirely of European actors, including Ewan McGregor, Stellan Skarsgaard, and Armin Mueller-Stahl, who betray so little emotion that it is impossible to tell who is a part of the conspiracy until long after the explosive climax.