The Rain is coming... and so is the Family. 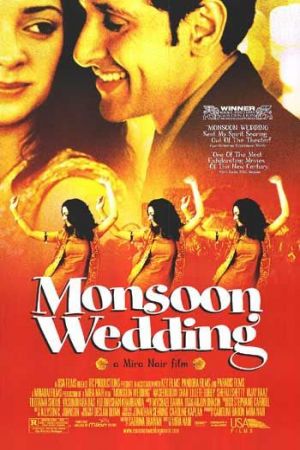 On the eve of the longed-for, cooling monsoon season, the far-flung members of an upper-middle-class Indian family gather in Delhi for a typical Punjabi wedding. Educated and affluent, they are at ease with the trappings of the modern world. Cellphone in one hand, whisky in the other, they slip fluently from Hindi to English to Punjabi, sometimes even in the same sentence.

But keeping one foot in the present and another in the past isn’t always easy. The groom, newly arrived from Texas, barely knows his intended; the bride has been having an affair with her married boss. As the big day dawns, the wedding contractor’s promises become more evasive, while the bride’s hard-pressed father worries how he is going to pay for everything.

Mira Nair’s sprawling, carnivalesque drama combines the colour and vibrancy of Bollywood with an earthy realism rooted in her background in documentary films. Her skill at interweaving the many strands of her complex plot recalls Robert Altman, but her film has none of his sometimes-rancorous misanthropy. She can be sharply satiric, but she treats her characters, high and low, without condescension.

Lalit, the bride’s father, played by veteran Indian actor Naseeruddin Shah, initially cuts a poor figure. He is exasperated, anxious and slightly ineffectual; but when crisis strikes, he shows unexpected reserves of strength and dignity. Dubey, the upwardly mobile wedding contractor, brilliantly played by newcomer Vijay Raaz, also comes across badly at first. With his cravat, sunglasses and wristwatch calculator, he appears absurd, affected, even slightly obnoxious. But it is a mark of Nair’s generous and compassionate vision, that when he falls in love with the family’s shy, innocent maid, drawn to her by their shared habit of eating the hearts of marigolds, the Indian wedding flower, he is rewarded with the film’s only truly pure romance.