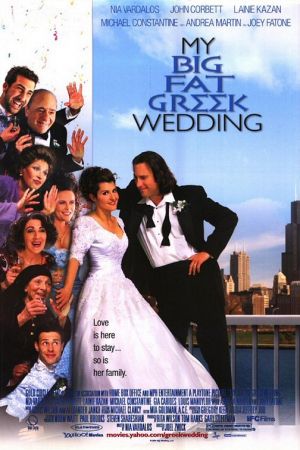 Toula is a Greek-American woman who is in her early thirties and single, with no immediate prospects of changing that status any time soon. This bothers Toula a bit, but not half as much as it distresses her mother and father, who want to send her to Greece in hopes of finding a husband in the old country. One day, after seeing a handsome stranger in the family's Greek restaurant and not having the courage to talk to him, Toula decides she needs a bit of self-improvement.

Despite her dad's misgivings, Toula signs up for a night-school class studying computers, trades in her glasses for contact lenses, gets a different job at a travel agency, and spruces herself up with a new look and a new attitude. To her very pleasant surprise, she once again encounters the handsome stranger, who soon asks her out on a date. Schoolteacher Ian Miller is seemingly perfect - he's tall, handsome, smart, good-natured, and soon in love with Toula - except for two little things: he's not Greek, and he's a vegetarian, both of which horrify Toula's family. So when Ian pops the question, the bride-to-be has to negotiate both families and prevent the wedding from going out of control, which is being planned around the notion that quantity IS quality.

Kirk Jones pulls out all the stops in this hilarious sequel to the classic family comedy. I’ll admit the trailer left me dubious as to the quality of this film as the first instalment I felt would be difficult to top.