Every family needs a hero. 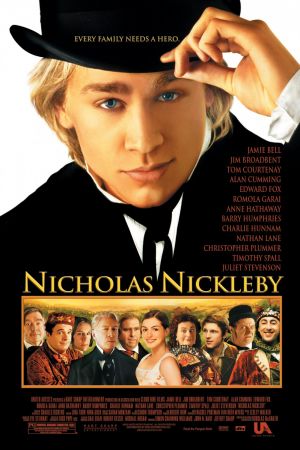 Heaving Dickens onto the screen can be about as fatal as heaving onto the bathroom scales after a heavy season of Christmas feasting; noisy, effort-laden and with a feeling that you've been ingesting something far too rich to be good for you. The BBC regularly gets away with it because a mini serial of 4 one-hour episodes allows for more freedom of movement and less drastic editing. Thankfully, the capable Douglas McGrath, who’d already proven he could do digestible period pieces with the frothy and fun ‘Emma’ in 1999, helmed this palatable version of ‘Nicholas Nickleby’. 'Nickleby' has been firmly edited to accommodate two hours of film, but in place of painful gaps there are instead a range of eccentric characters and scenic views and enough thespianic heavyweights to cunningly pin down the resulting slim-line plot.

The story revolves around a good, loyal lad and the misfortunes and surprises that his family undergoes in Victorian England. In case you haven't read the book: Nicholas's dad, a sort of genteel, middle-class, and naturally penniless, artisan, dies, leaving the 18-year-old in charge of his mother and sister. They travel to London to seek help from their uncle- their father's brother, and find a mean-spirited, bitter old man. Nicholas is sent away to a ghastly school in the North (aye, oop, it's grim oop North) as a schoolmaster. His sister and mother are given work in a hat-making shop. Nicholas, unable to watch the poor orphans being beaten and starved, legs it with the most unfortunate and picturesque. They join a band of wandering actors, lead by Dame Edna Everage and hubby. Then he hears that little sis is being pawed by Uncle's drinking buddies, and he hoofs it back to London, removing her from Uncle's circle of society, vowing to support her and Mum, also a new girlfriend and the unfortunate orphan. With the help of a pair of rotund, jolly financiers and a measure of good luck and kind-hearted help, he does, in time for a double wedding of himself and girlfriend and sis and her beau- the nephew of the rotund financiers. There is also a death, a rescue, comedy, stiff collars and even stiffer posturing on display.

In a nutshell... McGrath leaves behind some of the weightier social commentary and famous Dickensian satire in favour of a colourful ensemble cast piece, producing a warm, friendly piece of cinema. Not exactly taxing on the mind, but glorious on the eyes, the only small problem is that such a stellar company packed into a drastically reduced epic leaves each member with not quite enough material of their own to shine with. That said, this is an enjoyable, lightweight look at the classics and is a comfy evening out's viewing.