EVERYONE WANTS THE LAST WORD 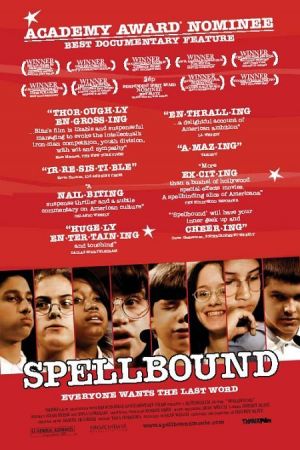 held annually in Washington, D.C. has two levels of appeal. On the one hand

a spelling competition with the drive and dedication of Olympic athletes.

The mere concept is rather crazy (in an "only in America!" kind of way) and

On the other hand, the film is more than a story about kids for whom the

dictionary is a bible of sorts. It's an exploration of American life and all

its layers of economic, ethnic, religious, and cultural disparity. Each kid

backgrounds and influences. As the film progresses towards its climax (the

championship bee), there is no way to predict who'll take home the trophy.

This is where a truth about American society emerges: at its core, it is

very homogeneous. There are ideals that, for better or for worse, transcend

individual differences, whether they be the emphasis placed on living up to

one's potential, the sharing of common goals, or the value of being

But if you're not too interested in the film's sociological

underpinnings, keep in mind that Spellbound doesn't try to sell a message

the way political documentaries do; its chief aim is to entertain, which it

does. So come out and watch it - you're sure to find yourself silently rooting

for a particular speller!