Everyone says he should date girls his own age. Oscar respectfully disagrees. 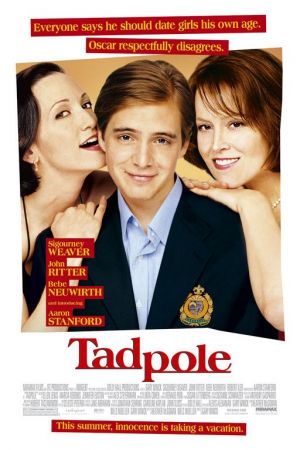 He's slick, witty and charming. He's a smash hit with beautiful, sophisticated, lonely women. He can compliment them in French, discuss Voltaire and flirt genteelly. There's only one problem. He's fifteen years old.

Oscar Grubman is mature for his age- extremely so. Finding girls his own age twittering and dull, he is surprised to learn that he has fallen in love with his stepmother, Eve, instead. So one Thanksgiving holiday, he decides to woo and win her from his father, even as a classmate is making the effort to try to win *him*. But spurned in his attempts, Oscar finds solace in the unexpected form of Diane, his stepmother's best friend. Satisfying for Diane, Oscar is still frustrated and continues to pursue Eve with surprising results.

This could so easily have been a sickly-sweet or just plain dodgy portrait of an under-age Don Juan, saying more perhaps about the middle-aged actresses in the film than any other meaningful message. But 'Tadpole' instead is a light, engaging comedy. Flitting over any May-December awkwardness, the elegant and talented cast (Sigourney Weaver; perennially gorgeous) turn in a couple hours of good-natured romps and life lessons.

As a neat foil and companion piece to 'Igby', Union Films presents a double-bill of two of the biggest hits of the Indie film circuit this year.