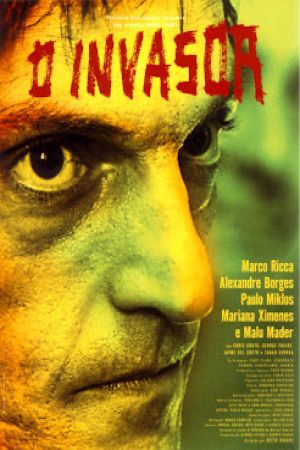 The Trespasser, a film from Brazil, has been described as disturbing, as a wild ride through a beautifully and strangely shot gangster land of brothels, raves, and bars. It raises issues of class, social climbing, greed and corruption, while delivering a "blistering political drama" as the characters get in deeper and deeper into the mire.

A hit man is hired to kill the business partner of two very shady white-collar businessmen. But instead of taking his money and leaving, this hit man has other ideas, and begins to show up at the businessmen's place of work, demanding more money, perks and looking as if he owns the place. The blue-collar hit man has decided that the business men are his meal ticket to a higher rung of the social ladder, and he is determined to get there, even being bold enough to insinuate himself into the affections of his wealthy victim's daughter.

As the film sinks deeper and deeper into greed and darkness, the hit man begins to make his move on the higher politics of the underworld itself, attempting to become its boss and overall leader, with nothing more than his own native wit and cunning to guide him. The film, described by the BBC as a "slice of Latin American cinema is as raw as a gaping bullet wound with a take-no-prisoners attitude" is not easy viewing, nor is it an amiable crowd-pleaser, but a dive into the sleazy world of power play and violence, played out against the clash between the underworld's politics and the equally dodgy shenanigans of the supposedly 'respectable' upper classes.