If you think you know Shakespeare....Think again. 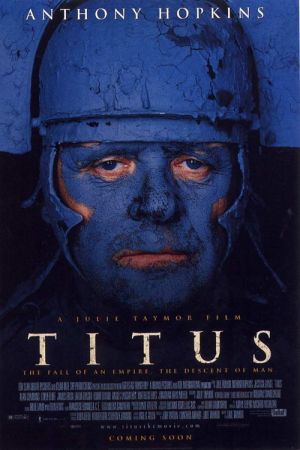 Being a cinematic version of Titus Andronicus, Shakespeare's bloodiest, goriest and downright most disgusting play, this film probably won't do well for those with delicate stomachs. If, however, you fancy seeing the 15 th century's version of Se7en then Titus is just the film for you.

Titus is a Roman general fresh back from a victory over the Goths, headed by evil queen-woman Tamora. After maliciously sacrificing her son right in front of her very eyes, Titus kind of gets on her bad side and she wreaks a rather nasty revenge. First she frames two of his sons for their uncle's murderand then gets her sons to do unspeakable things to his daughter. But Titus has an evil plan of his own (and it's just as horrible.)

Starring Anthony Hopkins and Jessica Lange as the central pair, the acting is superb and director Julie Taymor (whose last venture was the stage production of The Lion King) creates a truly unique and mesmerising world.

Even if you hated Shakespeare in school, you should give this film a chance, because I can guarantee it will be unlike anything from the Bard you have ever seen before (unless of course you've already seen Titus Andronicus).

It's got gore, mutilation, hatred, sex, evil and even a spot of home cooking that you definately won't be seeing on Blue Peter.