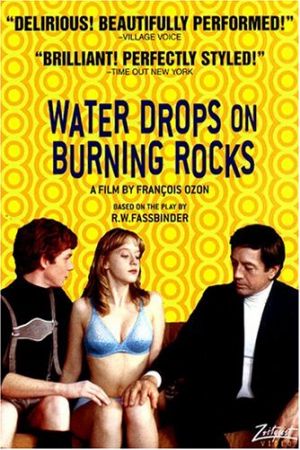 This screen translation of Rainer Werner Fassbinder's first full-length play sees the director, Francois Ozon, managing to reflect the play's stylistic garish décor and glut of reflective surfaces, whilst also drawing attention to the themes that his work is so often particularly concerned with.

For just an idea of what the story involves, you need merely to look at some of these characters. There is Leopold (Bernard Giraudeau), a bi-sexual fifty year old who cynically juggles and manipulates numerous relationships with the following characters. A petulant youth (Malik Zidi), his gauche fiancée (Ludivine Sagnier) and his transsexual ex-wife (Anna Thomson). Confused? Worried? Well might you be. The film's action is reduced to one location, but is no more restrictive on its characters for it, succeeding equally in allowing the cast to express themselves and in exploiting the characters to their own tragi-comic ends.

Hardly a popcorn fest for the faint of heart, Ozon's film sees him highlighting his obsession with gay politics and the oppressive tyranny of bourgeois politics. It might make you think, it might make you scream, or it might well make you leave but undoubtedly it will make you do something. A fine watch, especially rewarding, that proves to be bitter, astute and moreover uncomfortably funny.