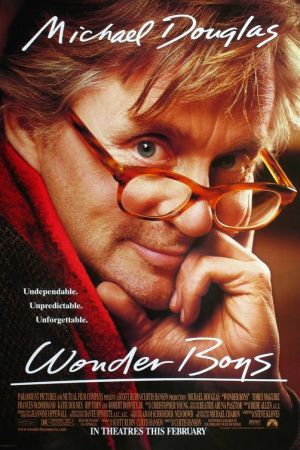 Michael Douglas plays Grady Tripp, a college professor who's going through a bit of a mid life crisis. He used to be a young star novelist but his second attempt at wowing the literary world has gone a bit pear-shaped. Add to that a wife that's just left him and a married mistress who's just announced she's having his baby. To make matters worse, Grady then takes troubled but talented young student James Leer (Tobey Maguire) under his wing and has the unwanted affections of another young student, this time female (Katie 'Dawson's Creek' Holmes) to deal with. All in all his life's a bit of a mess and he has to try and sort it out.

Michael Douglas gives the kind of performance that has sadly been lacking in his career résumé for a while, one of stature and real dramatic talent, and proves himself to be able to stand alongside the more acclaimed actors of his generation. The rest of the cast are also commendable. The fabulous Frances McDormand, of Fargo fame, gives a powerful performance as a woman in search of herself whilst also having the tricky details of a husband and oncoming baby to think about.

Don't think that this is merely a display of grown up actors in their craft, though, as the young uns give it a good shot too. The always impressive Tobey Maguire excels as the mysterious and troubled James and Katie Holmes shows that there's more to her than being Dawson's soulmate.

Directed by the man that gave the world L.A. Confidential (Curtis Hanson), Wonder Boys has all the insight and drama of his award winning previous film and is full of subplots and metaphors for any budding film critic to lament for hours over.

Overall, it's enjoyable and interesting, mixing storytelling within the characters' own lives with the storytelling of filmmaking itself. It may not be as action packed as some films, and the prospect of watching a middle aged man deal with middle life things may not hold much interest for students, but Wonders Boys is much more than a boring delve into the murky waters of adulthood. It's got sex, betrayal, law breaking, failure, hope and love all rolled into one. Even if it doesn't sound like your cup of tea it should definitely be given a chance.