They stood firing until they could stand no longer...156 MEN AGAINST A RAGING ARMY OF 7000! 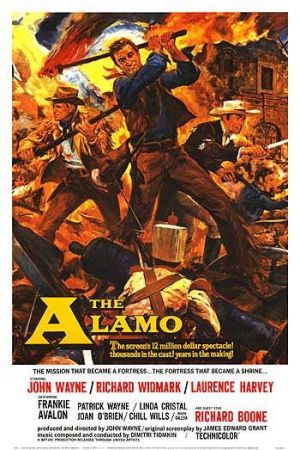 Ever wondered why Texans are like the way they are, well this film basically sums it up in a cool 203 minutes.

Here's the basic back-story: Texas, then a province of Mexico, is inhabited by a large number of immigrant farmers from all over the world, but mostly the US. Then Mexico decides, we're going to make them pay taxes and start speaking Spanish, not a good move.

So Col Travis, played by Laurence Harvey, gets some all American heroes together, including Davy Crockett, of course played by John Wayne, and Jim bowie, played by Richard Widmark, to save the day. They basically say to the Mexicans, "No, I don't think so, I think we'll make our own country."

This doesn't go down well with the Mexicans, so they decide to "crush the rebellion," and the evil Santa Anna leads his troops into the mission city of San Antonio and begin their siege of the fortified mission, The Alamo.

The rest is history, or well myth, but when it comes to Texas history they're one in the same.

So, if you're up for some serious doses of John Wayne, and American-gun-toting-ness come on down to the Uniplex this Sunday.

Be warned, this film is over 3 hours long, and will be including an intermission, not to mention a pillow may be a good idea.